I am posting this to answer my own question (to spread the word in case anyone else has had this issue.)

I am generating a QR code using ZXing's Android library. The QR code generates properly and I am able to display it (after rendering it out manually using QRCode.getMatrix().getArray().) However, the QR code generated does not scan with most of the QR code readers available on the Android market, including ZXing's scanner itself!

Additionally, whenever I set the error correction level for Encoder, it ignores it and encodes with some random level (usually level Q).

I generate the QR code with this piece of code:

...and then, after obtaining the QRCode object, I draw the bitmap like so:

Here's what I end up with.

It looks right, but it won't scan. A handful of QR code scanner will still scan it, but most will not. What's going on?

The answer to this issue:

The QR code is actually flipped. Although the ZXing documentation does not explain how to index into the array that qrCode.getMatrix().getArray() returns, it assumes that you will index it as [y][x], and then draw that cell at (x,y). The code posted in the question indexes the array as [x][y], which flips the image along the Y=X line.

The resulting QR code seems legitimate, but only 'smart' scanners can detect this sort of flipping and scan it.

The error correction level bits are also on the opposite corner, so if you were to verify by hand (looking at a few bits in the lower right corner of the image), it would appear that the library is ignoring the error correction settings. 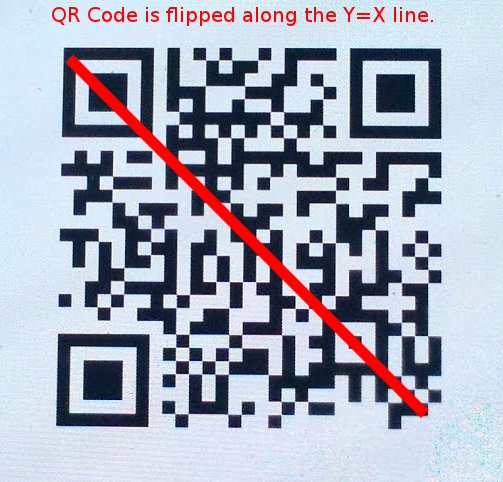